Warning: iPhone 3G should only be purchased by idiots

The buzz around the iPhone 3G launch caused a lot of excitement, plenty of crashed servers, and some very unusual queuing. Despite that, iPhones were still fairly easy to buy within the first week of the phone’s launch. As a small business owner and avid technologist, I couldn’t resist. Perhaps I should have.

Here are my five killer reasons why the iPhone 3G sucks.

Apple really dropped the ball on the built-in camera with this phone. If you’ve ever had a Sony phone then the iPhone will make you feel like you’ve gone back in time a few years. The camera lens is poor, its white-balance settings are dreadful and there’s no light on the back never mind a flash.

Once you’ve turned the device on its side, ready to take a picture (like you would any normal camera), there’s not even a button in a convenient place to press to take a shot! You have to touch the screen, which will cause the device to physically move, blurring your shot, unless you’re holding the phone in some kind of vulcan death grip.

Even if you persevere with the above, when it comes time to get your photos onto your computer, get ready for some pain. When you plug the iPhone in, up pops iTunes as normal. However, just as you go to use iTunes, up pops iPhoto! This happens every time you connect the iPhone to your computer, regardless of whether you’ve taken any photos in the last year.

Oh, and you can’t record video or do video calling at all either. On your brand new top-of-the-range 3G phone.

To sum up: the camera sucks, the photo syncing sucks. Roll on iPhone 3.0, where they might actually build a decent camera into the most expensive camera-phone on the market.

Before the nay-sayers start up with cries of “you suck, I bet you just downloaded crappy applications”, most of the crashes I’ve seen are when using built-in applications like email or contacts. The most common crashes occur when I’m trying to play the two most popular games for the device!

The lack of stability is a bit of a shock against other modern Apple products. And I’m not the only one that thinks so.

I don't think TomTom will be shaking in their boots just yet.

You might expect a device that contains a GPS receiver to be pretty good at tracking where you are. Think again. While the iPhone does manage to trace your location (albeit pretty jerkily), it seems wholly incapable of correlating your position against any directions it gives you.

If you look at the picture on the left, you might reasonably assume I was in Luton. You could be 30 miles away, (half way to London) and iPhone still won’t update its instructions. It will continue to insist that you should turn left at the end of your road, even if you’re on a major motorway while it tracks your position on the map!

The above is almost a moot point because of the appalling lack of legal navigation features that the iPhone ships with. Despite its blindingly fast ability to route you from one end of a country to another, it outright refuses to speak. So don’t even think about using it as a navigator in a car unless you have a willing passenger to thump buttons every time you make a turn. 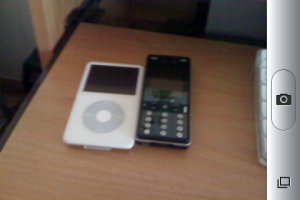 The battery life on the iPhone 3G is a shocker. I’ve grown accustomed to getting a slightly increased battery life every time I upgrade to a new phone. My first phone was a trusty Nokia 8210 that would work for a couple of days before needing a recharge. More recent Nokias gave rise to periods as long as a week between recharges. Last year new Sony phones even started to go well into a second week without needing a recharge!

Sadly, with the new iPhone you’re looking at having to charge it up daily or every other day. And that’s even when you have bluetooth switched off, the brightness set low, and rarely use wifi.

I kid you not. Charge it daily.

5. Lock up your daughter

It’s hard to know whether it’s Apple, the network provider or a grand conspiracy that prevents an iPhone user from using paid-for wireless network services on a laptop.

This is a case of device locking gone mad – you can’t use the bluetooth for anything really useful. The only way to use your unlimited 3G or EDGE data allowance on a laptop is to “jail break” your iPhone, putting you into the realm of hackers. I normally have no problem with fair-use restrictions if they can help guarantee everyone gets a decent price and a reasonable experience, but this is a lock-in too far.

On O2, the iPhone plans also come with so-called unlimited wifi access to The Cloud and BT Openzone. But don’t think you’ll be able to use BT Openzone on your laptop either! It’s strictly phones-only there. I don’t know how anyone at BT managed to approve the word “open” in that product name while keeping a straight face.

All of the above can (and probably will) be fixed in upcoming versions of the iPhone. A couple of months of extra polish from Apple engineers could easily make all the difference to the user experience. You can probably expect truly great things from iPhone over the next few years.

Next month; “Why everyone should buy an iPhone.”

What sucks about your iPhone? Let us know in the comments below.

This entry was posted in Miscellaneous and tagged iphone, mobile. Bookmark the permalink.

3 Responses to Warning: iPhone 3G should only be purchased by idiots